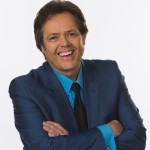 Jimmy Osmond began his 50 year show business career at the age of three.  He was the first in his family to receive a gold record at five years old. Collectively, Jimmy as a solo artist and with his family, share 56 gold and platinum records and other prestigious entertainment awards. Jimmy still enjoys making and producing music today with his latest release being “Moon River & Me.”  Jimmy has also had the opportunity to preform in musical theater including everything from playing Teen Angel in “Grease” on the West End, to Billy Flynn in the play “Chicago,” to Captain Hook in the British Panto “Peter Pan,” and many more.

Over the years, Jimmy has also appeared on numerous television shows and reality programs including, “Fame,” “Love Boat,”  ITV’s “I’m a Celebrity, Get Me Out of Here!,” as well as “Celebrity Family Fortunes,” “Celebrity Come Dine With Me,” “Popstar to Operastar,” and most recently, “Celebrity Master Chef.”

Jimmy enjoys producing as well as performing, and has produced many live shows and events all over the world.  He is an award-winning producer for BBC, PBS, ABC and The Disney Channel.

Jimmy purchased the Andy Williams Moon River Performing Arts Center in Branson, Missouri from Andy’s family in 2014. Honoring Andy’s wish that he keep his legacy going, in 2015 Jimmy debuted the productions, “Moon River and Me” and the “Andy Williams Christmas Extravaganza.” The shows pay tribute to his mentor and lifelong friend, whose television show gave the entire Osmond family a platform to launch their careers. In addition to performance dates at the Andy Williams Performing Arts Center, both of these shows are currently being taken on tour in both the U.S. and throughout the U.K.

Jimmy is an advocate for children’s literacy, is Chairman of the Osmond Foundation and sat on the board of trustees for Children’s Miracle Network Hospitals for nearly 25 years.

For more on Jimmy Osmond: